Call us barbarians, uncivilized and outright disgusting.  Your ancestors (who might also be mine, as we share the same lifeblood) did it too. Cringe at the mere thought of having your bare hands directly transfer food from your plated hors- d’oeuvres  to your mouth. I come from an Asian region where eating with the use of your hands is acceptable. Let me rephrase that, was acceptable at home.  The general practice however is starting to become a fading custom. Irony has it so that even a local restaurant named “Kamayan” (eating with your hands – which is a terrible translation of the word) do not have patrons who eat with their hands. Blame it all on the pervasive spread of microbes or our strong affinity or better yet desperate need to be a carbon copy of the west but we haven’t really practiced “kamayan” in public. I have done it as a kid at home but haven’t really done it since so imagine my surprise when I came across this long lost tradition in Malaysia. When we arrived, the only open place was KFC (and Malaysia is just littered with KFC’s left and right) . I ordered a 1-pc chicken with the usual coleslaw side. On my tray, the crew placed the 1) napkin 2)glass with soda – mountain dew 3) straw 4) my 1- pc chicken placed on a small carton-like square plate 5) my bun 6) coleslaw side and (drumrolls) 7) a plastic mini-fork/spoon rolled into one. I thought hey, you can eat chicken with your fingers anyway so I didn’t make too much of a big deal out of it (even it did come with the obvious hassle and me breaking the teeny weenie spork).

Day 3, we decided to eat at a local marketplace to try “authentic Malay” food and started to eat with the spoon and fork we saw placed on the tables.

Friend: Look, look at my spoon!

Me: What did you do? How’d you break it?

Friend: I don’t know, I just started cutting into the chicken then it broke – (it made a 90 degree bend).

Me: (getting hold of a new spoon) Idiot, let me do it!

Me: What the hell? Let’s try it on the fish.

Us: Wahahaha. What the hell?

Everytime we’d try using the metallic spoon to cut into the chicken we were eating, the spoon would bend. I thought the chicken was just probably too hard so I tried it on the fish (yes, the FISH), but it still broke. By this time, we were already making a public disturbance, laughing every time we break the spoon and fork that people were already staring at us. Finally, the young local couple eating in front of us handed us this red plastic kettle looking container which was how we were supposed to wash our hands before eating. 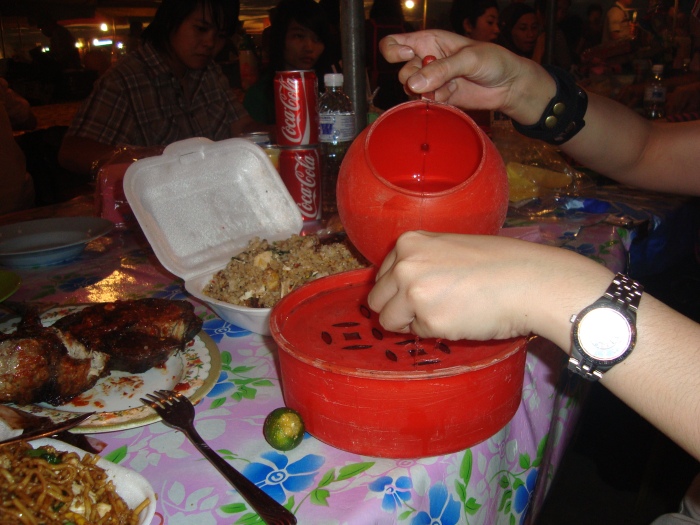 Ah, so that explains the bending spoons (which I think were just meant for you to eat soup or other stuff on) and also the plastic-like napkins which we found completely weird as well. Enigma solved! And as I dipped my hand in the freshly cooked rice – I burned my hand. Malaysia, truly Asia.

What do you have to say? x